I am seeking graduate students and postdoctoral fellows. If you are interested in advanced photovoltaics or the role of quantum mechanics in biology, please contact me via email, providing your cv and a description of your interests.

My research interests are focused on photovoltaics and nanoscience. These topics share a common reliance on the quantum properties of condensed matter systems. My photovoltaic research deals with both inorganic and organic photovoltaics with goals to understand advanced photovoltaic systems, improve solar conversion efficiencies, and produce affordable sources of low-carbon electricity.

The University of New South Wales has posted video of me discussing some of my group’s work on intermediate band solar cells, from August 2018. 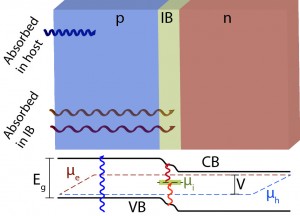 With an intermediate band, two low-energy photons can promote an electron from the valence band to the conduction band.

With an intermediate band, two low-energy photons can promote an electron from the valence band to the conduction band.An ideal intermediate band photovoltaic, cartooned above, could have an efficiency of 63% with concentrated sunlight, higher than the 41% maximum without the intermediate band.

Ordinarily, states in the middle of a semiconductor bandgap are terrible for device properties, as they form nonradiative recombination centers, owing to the strongly localized character of their electronic states. The Madrid group proposed that increasing the concentration of impurities sufficiently to cause an insulator-to-metal transition will delocalize the eigenstates and suppress non-radiative processes.

I have shown theoretically that delocalized states in the intermediate band will not in fact suppress nonradiative recombination, due to a process I call phonon-induced localization. This work shows that future experimental efforts in IBPV should be devoted to finding materials that strongly absorb the subgap photons and where the defects do not cause too much nonradiative recombination; there is no reason to expect that metallic intermediate bands will have helpful properties.

My experimental collaborators in the Mazur, Aziz, and Buonassisi groups at Harvard and MIT are exploring silicon hyperdoped with sulfur, selenium, or tellurium. The materials show strong sub-gap absorption, and we are working to understand probe the recombination properties.

Future theoretical work will focus on optical absorption properties and device-level modeling in intermediate band photovoltaics. With these tools, we will make predictions of what material systems are optimal for IBPV. It is a long road to making high efficiency IBPV devices, and there is a range of exciting theoretical and experimental challenges along the way. If such devices can be made, they could revolutionize global energy production systems. 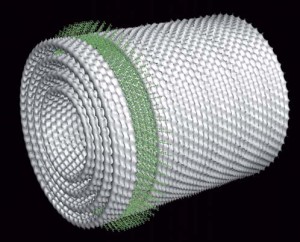 The chlorosome is a highly efficient antenna complex in green sulfur bacteria. It consists of an ordered roll-like structure with hundreds of thousands of bacteriochlorophyll molecules and is highly efficient at transferring excitation energy to reaction centers. The system is both large and ordered enough that condensed matter techniques, band structures and localization physics, provide a useful framework for understanding its function. I am adapting the Green-function based technique used to explore localization in the disordered models for intermediate band photovoltaics to study the dipolar couplings in the chlorosome. I will study the localization and transfer pathways of electronic excitation in the chlorosome, including the effects of molecular motion. This project can give insights into what kinds of quantum transport effects are occurring in biological systems.

The backbone of the conjugated polymer, PPV.

Organic photovoltaics strive to be moderately efficient (10% would be excellent) and extremely inexpensive. In a polymer solar cell, a chromophore absorbs a photon, producing an exciton; the exciton migrates to an interface between materials; the exciton is separated into excited charges in the two materials; and those charges are extracted. The second and third processes are the least well understood and controlled in polymer photovoltaics, and I propose a project aimed at understanding the second: excitonic energy transfer in polymers. Using the formalism of exciton scattering, we plan to understand the transport of excitons, and how it is influenced by the motion of the host polymer, with reasonable computational cost.

Nonlinear spectroscopies have shown long-lived quantum coherences in a number of organic systems, including polymers and photosynthetic complexes. Whether these coherences are required for the efficiency of photosynthesis is an area of active exploration. To answer that question, we must understand the origins of the coherences. We are exploring the use of nonlinear spectroscopy as a quantum process tomography, which fully determines the evolution of the electronic excitation in the system, allowing detailed characterization and study.